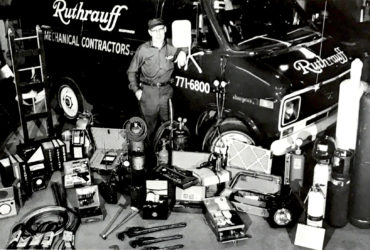 William N. Sauer was born in old Allegheny, now the North Side of Pittsburgh on February 11, 1858, at the time city sewage systems were first introduced in the nation. It was a time of stress and change as America was still recovering from the Civil War. On his 18th birthday, he received a gift of $50 from his mother. He used it to start a small plumbing business – the foundation of the business known today as Sauer Incorporated.

In 1906 Bill Sauer met John G. Steitz, a young pump salesman from New York. These two men joined forces and began to specialize in large construction work. It soon became accepted practice to design the water supply systems of a building in close coordination with its heating system – leading Sauer Company into the heating field as well.

Mr. Jack Ruthrauff founded Ruthrauff in 1934 when he opened a refrigeration equipment distribution & service company. He branched out into the air conditioning field in the mid 1950s when Mr. Nick Laux joined the company, forming Ruthrauff Incorporated. Ruthrauff purchased Coleman-Good, Inc, a well-established plumbing firm in 1969. Mr. Laux and Mr. Ruthrauff had set a goal to become a complete mechanical contractor and the purchase of Coleman Good Inc. gained them entrance into the plumbing field. Operations of both companies were consolidated into one location in McKees Rocks in 1971. Coleman-Good merged into Ruthrauff Incorporated at the end of 1985 and Ruthrauff Inc. was established.

During the ensuing years Ruthrauff opened its own sheet metal and pipe fabrication shops. An in-house engineering staff provided both design and construction services and contributed to the extensive resume of design/build work that includes HVAC and Plumbing projects for a wide variety of commercial, industrial and institutional clients.

Beginning in 1989, a group of key employees, led by David & Nora Faller, acquired ownership of Ruthrauff Inc. as Mr. Laux gradually phased out. All facets of engineering, project management and accounting were computerized and networked and the corporate structure streamlined into a single entity with a focus on being “The Single Source Advantage” to its customers.

In 2011 a new company, Sauer Building Solutions, Inc. was created to expand our service capabilities to other areas of the country.

Sauer Building Solutions acquired HVAC Technology Inc. in Charlotte, NC. This latest acquisition allows us to service all of North Carolina with the same capabilities as our Pittsburgh, PA location. At the same time, Sauer Technical Services, Columbus, OH became a part of this growing group. In 2016, we acquired Eneco East, Greenville, NC.  This new acquisition allows us to service the entire state of NC.